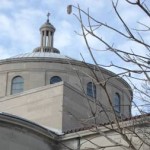 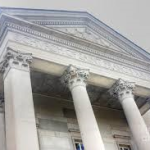 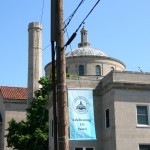 St. Francis Xavier Parish, located in LaGrange, Illinois, has grown in size from 94 households in 1890 to a faith community of approximately 3000 households.

Rev. James M. Hagan was appointed in a letter written on October 15, 1890 to be the inaugural pastor of our newly formed parish and, soon after, he celebrated the parish’s first mass in the home of Dr. George Fox, which was located at 60 S. LaGrange Road. At that time, the parish boundaries were defined as: Roosevelt Road to the north; Joliet Road to the south; the Des Plaines River to the east; and the Belmont Road train station to the west.

Franklin Cossitt donated the land where our first church was built-a wood-frame, Gothic-style building aptly named for the missionary, St. Francis Xavier. It was built on the southwest comer of Ogden and Spring Avenues in 1892, on the site of our present facility.

The Sisters of St. Joseph came to LaGrange in 1899 from Kansas. Their first school, Nazareth Academy, was opened at 120 N. Spring and later moved to the comer of Brainard and Ogden Avenues.  It served both as a convent for the sisters and a school for the children.

In 1903, Fr. Joseph A. Bollman became the pastor of St. Francis Xavier as the parish continued to grow.  The doors of the first school, a red brick building with four classrooms, were opened to an enrollment of 140 children in 1917.

The following years saw rapid population growth in the LaGrange area and, in 1922, Fr. John H. Nawn was appointed pastor. In the midst of the Depression, Fr. Nawn received what seemed to be an insurmountable task. Cardinal Mundelein mandated him with the ambitious responsibility of building a new church building. Despite the financial obstacles, the dedication of the imposing, Romanesque structure took place in 1931.

Fr. (later Monsignor) William J. O’Brien was appointed pastor in 1937. Our Golden Jubilee was observed in 1940. Approximately 4000 people attended an outdoor Mass that was celebrated on the grounds of St. Joseph Academy, located west of the church on Ogden Avenue. To mark the jubilee, a history of the parish’s first 50 years, the “Golden Book”, was published.  A dinner dance capped off the festivities.

Nine years later, our current school building was constructed.  Its 14 classrooms and 9 additional rooms held an enrollment of 420 students. The following year, our church was redecorated and included the addition of a mural over the main altar. In 1957, the Kensington Annex (at 125 N. Kensington) was purchased to accommodate a growing student body; it served Kindergarten and Grade 3 classes.

The parish’s Diamond Jubilee, celebrating 75 years, unfolded in 1965. Highlights included a Carnival Jubilee Luncheon and Style Show, a homecoming picnic at our Lady of Bethlehem Woods, a solemn high mass and dinner dance. A Diamond Jubilee Book was published to commemorate the major events of this celebration.

In 1967, Fr. Pierce J. Joyce joined the St. Francis Xavier community as pastor. His tenure ushered in all the changes of Vatican II. The first guitar mass took place and the 5:00 p.m. Saturday evening mass was introduced. Lay people began to distribute Communion as Extraordinary Ministers of the Eucharist.  Other local church denominations joined our community for Ecumenical Prayer Services held at St. Francis. This same year also saw the establishment of the SFX School Board and Home School Association (now known as FSA, the Family School Association).

Another transition of pastors occurred in 1981, when Fr. James E. Kill moved to St. Francis. As the parish continued to grow, the Finance and the Physical Plant Committees were formed to assist in the work of parish.  The SPRED (Special Religious Education) Program was begun at St. Francis at about this same time.   In 1983, the Chicago Archdiocese instituted the Sharing Parish Program that established our bond and long, vital relationship with St. Agatha Parish in Chicago.

Six years after the preceding transition in pastoral leadership, Fr. Daniel B. Coughlin was chosen as pastor of St. Francis Xavier parish by Joseph Cardinal Bernardin in 1987. Parish outreach initiatives developed during this time.  Our SFX Food Pantry had its inception in 1987 under the guidance of Sr. Dorothy Lynch CSJ and in 1989 the parish became actively involved in the B.E.D.S. (Building Ecumenical Discipleship through Sheltering) program, welcoming the homeless every Monday night from October through April. Our Parish Centennial Year began with an Ecumenical Prayer Service in January 1990.

Early in this same year, a Parish Council was proposed and a steering committee began the task of researching other parish councils-with an eye to forming a council of our own. A meaningful and viable Parish Council has evolved thanks to the input of many parish members. Other centennial events followed, including an old-fashioned Parish Picnic with outdoor mass and a Fall Dinner Dance.  A replica of the church even graced a float in the Annual LaGrange Pet Parade!  A parish history, outlining the first 100 years, was published to mark the Centennial. Several souvenirs from these Centennial events were encased in a time capsule and placed in a vault under the main altar.

The Centennial Year ended with a Mass at which Cardinal Bernardin presided. It was at that liturgy that the next pastor of St. Francis Xavier parish, Fr. William Stenzel, was introduced. The second hundred years of St. Francis Xavier parish started with a collaboration between pastor and parishioners that resulted in a major renovation of our worship space. Renovations began in June of 1993 and the first Eucharistic celebration was held in the renewed worship space that same year on Christmas Eve.

A progression of restorations and improvements in all our buildings and grounds has ensued with the onset of the new millennium.  The office and living spaces of the rectory were renovated in 2001-2002, a chapel was carved out of space in the education building, and computer labs were enhanced.  The “Mary Garden” was established and the sculpture by Sr. Mary Southard CSJ, “Mary in the Garden,” was installed as the centerpiece of this outdoor space between the church and rectory, among flowers and shrubs planted and tended by the “Edythe” [Skokna] landscaping ministers.

Growth has been the hallmark of the last two decades. A surge in our Day School enrollment prompted the expansion of the Day School to the East Campus (located in space rented at the First Baptist Church, Ashland and Bell Avenues) in 1999, with new emphasis on pre-school education. Our Religious Education program has seen a parallel growth in numbers, and now serves students two days a week in three separate sessions.  The youth ministry program, which started in 1986, was further developed by Ms. Terri Simeoni (Youth Minister) and Fr. Mike Shanahan (Associate Pastor) in the early 1990s as the QUEST program.  It is now firmly established as a vital and significant ministry for teens. QUEST provides teens the opportunity to serve others while sharing their faith with other teens and adult sponsors.

Spirituality is addressed through opportunities for spiritual direction/companioning, as well as seasonal reflection books written by parishioners and Evenings of Prayer and Reflection during Advent and Lent. A vital relationship exists between the parish and The Well Spirituality Center, sponsored by the sisters of the Congregation of St. Joseph.

The St. Francis family is blessed with a wide variety of ministries, organizations and activities supported by a vibrant and growing parish population. New initiatives are always on the horizon and seek to answer expressed and observed needs of the parish and community beyond.

The most recent transition of pastors came in the midst of our continuing growth, expansion and renewal.  After 15 years, Fr. Stenzel left SFX and we welcomed Fr. John Hoffman as the ninth pastor of our parish in the summer of 2005.  Under his collaborative style of leadership, St. Francis remains a vital and welcoming place to call “home.”