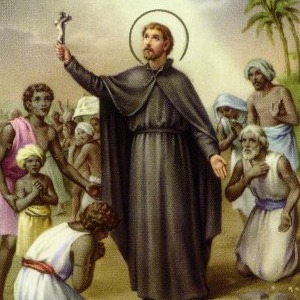 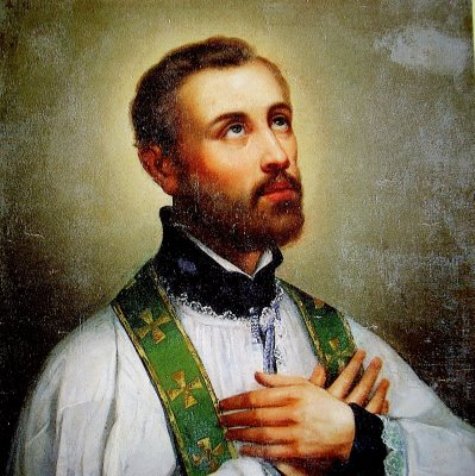 “The dangers to which I am exposed and the tasks I undertake for God are springs of spiritual joy, so much so that these islands are the places in all the world for a man to lose his sight by excess of weeping; but they are tears of joy.”  —  St. Francis Xavier

• Educated at the Univ. of Paris in the 1530s, where he met Ignatius of Loyola and Peter Favre.  In August 1534, Francis and other men made vows of poverty, chastity, and obedience. Pope Paul III approved the formation of their order in 1540. This order became The Society of Jesus, more popularly known as the Jesuits.

• Pope Paul III asked the Jesuits to take a mission to India to help restore Christian virtue among the Portuguese settlers there.

• In 1541, he was appointed apostolic nuncio (an ambassador of the Church) to Asia so that he could formally represent the Church, and left for Goa. At that time, Goa was the capital of a Portuguese colony on the west coast of India. The voyage took 15 months. He arrived in May, 1542.

• In his parting letter to Ignatius, he wrote: “For what is left of this life, I am well assured, it will be by letter only that we shall be together – in the other we shall embrace face to face.”

• Through his preaching he won many conversions, almost all among poor, tribal, and lower-caste peoples. Francis ministered to the sick, the children and the native people of the Pearl Fishery Coast.

• In his travels, he tended to the needs of the sick and infirm, revitalized the liturgical and sacramental life of already existing Christian populations, and drew people to faith in Jesus Christ.

• In 1546, he explored other islands in southern Asia. Xavier went through the islands of Malaysia. In Malacca, Malaysia he met a Japanese man named Anjiro. Francis converted Anjiro to Christianity, making him the first Japanese convert.

• In 1549, he moved on to Japan, where he made a hundred converts in a year at Kagoshima. By the time he left three years later, there were 2,000 Japanese Christians. He returned to India in April, 1552.

•  Still in 1552, he quickly decided to travel to China for mission work by invitation. He became ill with a high fever on the way, and died almost alone on the island of Shang-chwan, six miles off the coast of mainland China.

• His death was on December 3, 1552 at the age of forty-six. His body was later transferred to Malacca then Goa in December 1553. He remains buried in India in a silver casket encased in a glass.  Several of his bones have been removed as relics. His right arm, which he used to bless converts, is on display in Rome.

• Francis Xavier remains one of the greatest missionaries in the history of the Church.

• He was canonized on Mary 12, 1622, along with Ignatius of Loyola, Teresa of Avila, and Philip Neri.

• In 1927 he was declared the patron saint of foreign missions.

We pray:  Make me your faithful follower, Lord Jesus, as was Saint Francis Xavier. May others hear and see you through me. I pray through Christ our Lord, Amen.